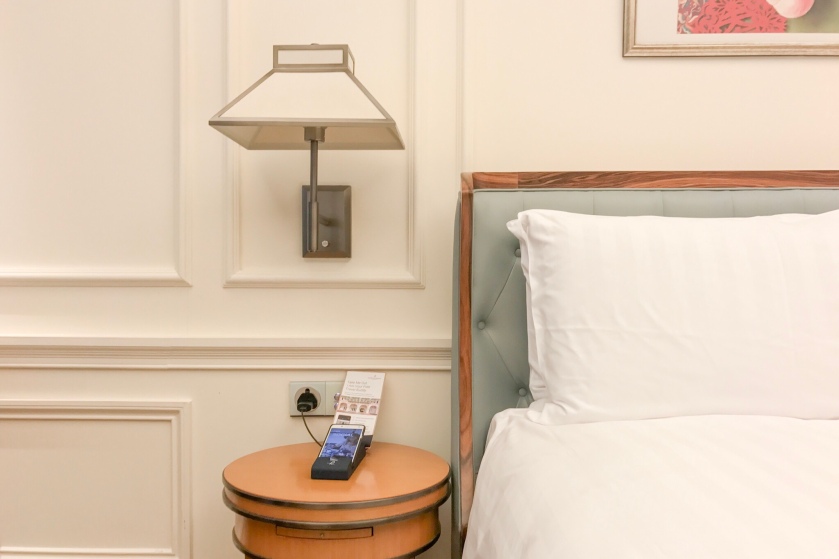 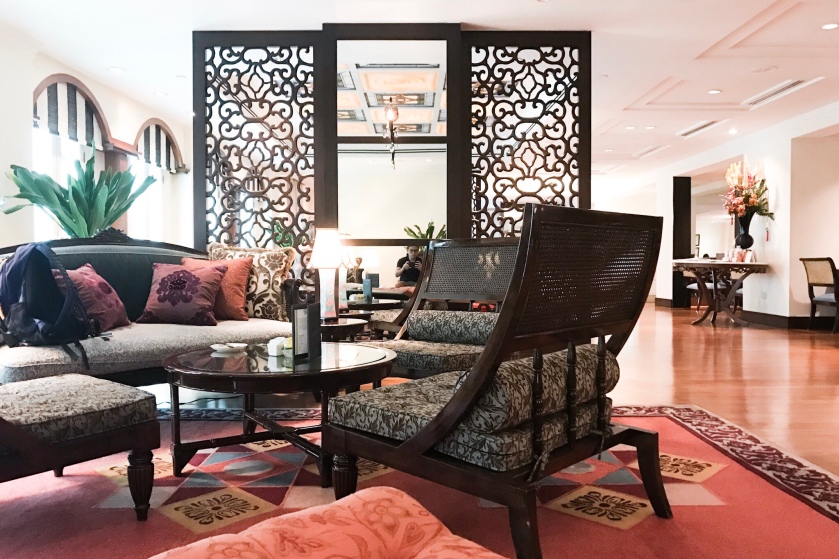 I’m not a IHG Rewards member, so in all honesty a stay at a IHG property usually ranks low on my list. Seeing that the Intercontinental Hotel Singapore has got a very good corporate rate this weekend, I snapped up the opportunity to try out – for the first time – this gem of a hotel in the heart of town.

When I first walk up to the glorious lobby, I was escorted to the club lounge for my check-in. Being my first time at the property, I was immediately taken in by the design of the lounge: spacious, well adorned, boasting a good blend of peranakan ornaments with very tasteful furnishing.

Check-in was a breeze, with most of the work done by the lounge staff while I tuck into a cup of freshly brewed coffee.

A little bit of history first. The hotel is built in 1995, jointly integrated with the adjacent shopping mall Bugis Junction which featured a series of preserved shophouses. When it first opened some people were dismayed that the taller block stuck out like a sore thumb, and decidedly a bad location given it was on the fringe of the CBD.

Fast forward 20 years later the hotel is definitely well placed in an area mixed with shopping, business and culture, so the development definitely paid off.

Most recently, the hotel was last refreshed in 2016, the 403-room property still look as classy as ever, very much living up to the name of an InterContinental property. 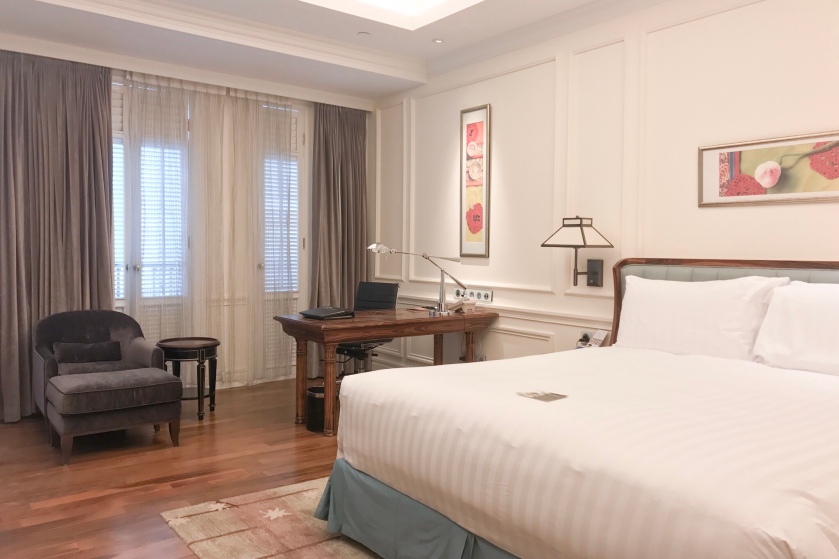 I stayed put in the Heritage Room, which tucked away from the main 16-storey block, along one row of the preserved shophouses. While it was quite a stroll to the room, the rooms are charmingly housed in two rows. The only hint of it being built into what used to be shophouses is the crooked corridor that veers off one way – the only reason being the old handbuilt nature of these shophouses that did not rely on heavy machinery and precision measurements that enables today’s grand architectural feats.

The room is spacious, in a sense that’s similar to properties built in that era. Spanning 38 square metres the room can comfortably house a small family, or perhaps a little cosy gathering with friends (but please do check on the guest policies first). I love the fact that there’s a bathtub that I can soak in, which is becoming a rarity as newer hotels begin to do away with them. 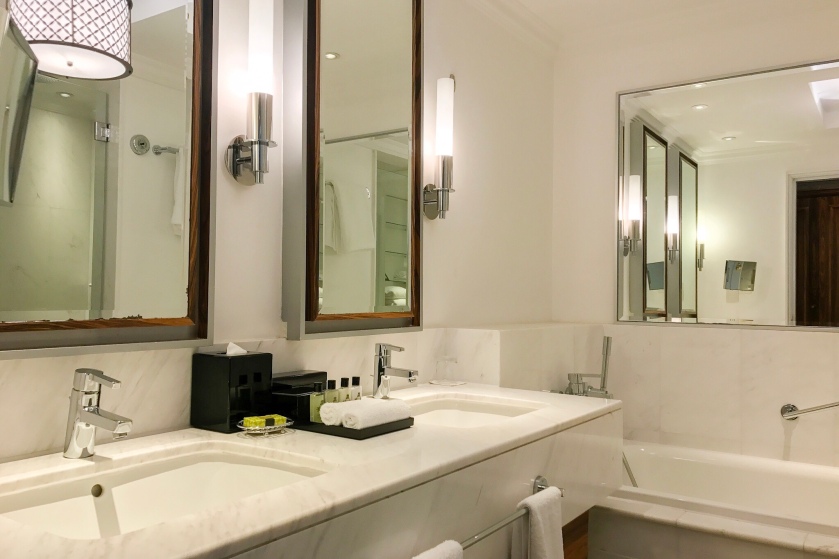 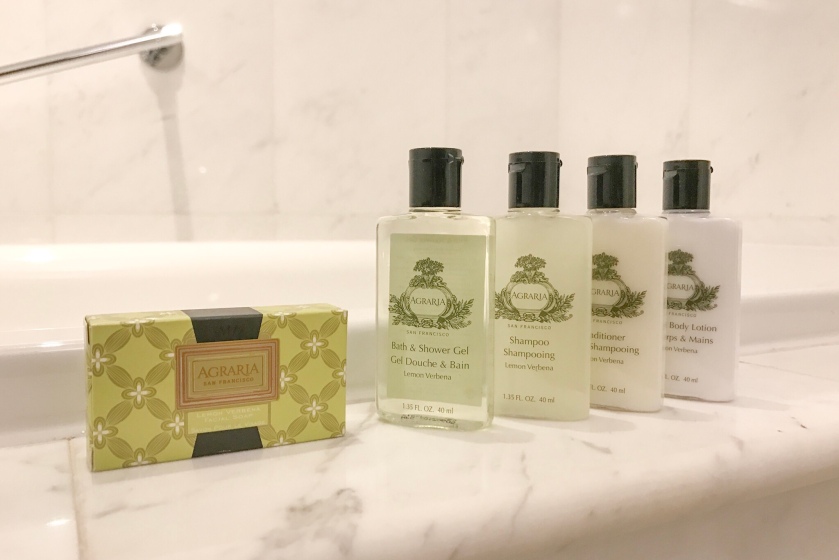 The room is a little dated; you can see that the furniture is starting to look kind of tired, such as the visible scratches off the furnishing. Last refurbished in 2011, it’s a few years shy of a decade old, which is decidedly dated given the heavy use of the rooms. The bathroom gives off another sign of age, especially around the edges. Having said that, the room is still incredibly clean and well maintained.

The Heritage Rooms doesn’t come with a Nespresso machine (which I hear is available in higher class rooms) but instead comes with instant freeze-dried coffee and TWG teabags. 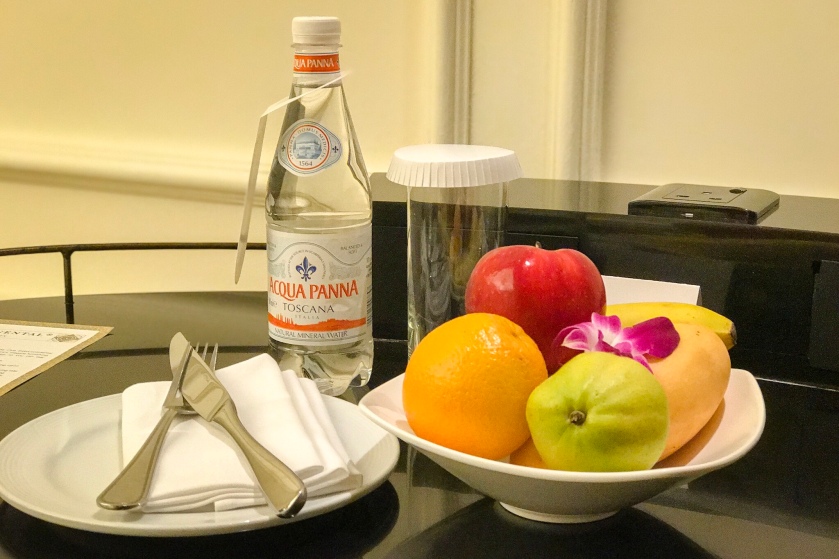 In the evening the hotel also provides a turn down service, and I was pleasantly surprised to find a fruit bowl and a complimentary bottle of still water being placed on the table as well despite the fact that I wasn’t a high tier loyalty member. A very nice gesture, even though I typically am too lazy to have the fruits.

This has got to be one of the most amazing hotel lounges I have been in Singapore. Having been to a couple in Singapore, including an incredibly underwhelming one at JW Marriott, the Club InterContinental Lounge has really impressed me. 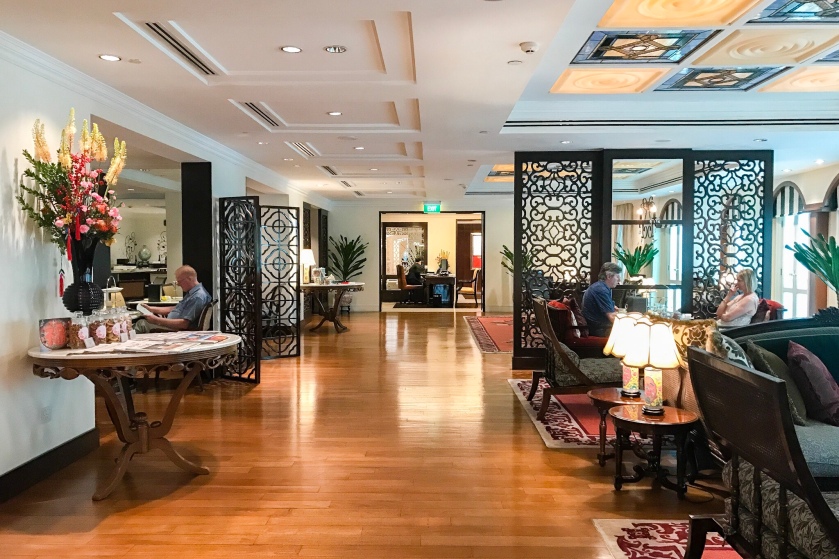 First let’s talk about the decor. The entire hotel is decked out in Peranakan (Straits Chinese) feels. This is the same in the club, where instead of the usual grandeur you get out of a teak and marble combination, you get wood-carved screens, oversized chairs and couches with rattan insets. Chinese porcelain decorations are littered everywhere, including an oversized bowl that serves as a basin in the washroom.

For the uninitiated, the lounge serves up breakfast daily, as well as an afternoon tea from 2.30pm to 5pm as well as evening cocktails from 6 to 8pm.

I have read good things about the high tea and it was true to what you search online: A three-tier afternoon tea set consisting of scones, savoury sandwiches and sweets, including peranakan cakes. Of course, there’s endless coffees and TWG teas that you can have. 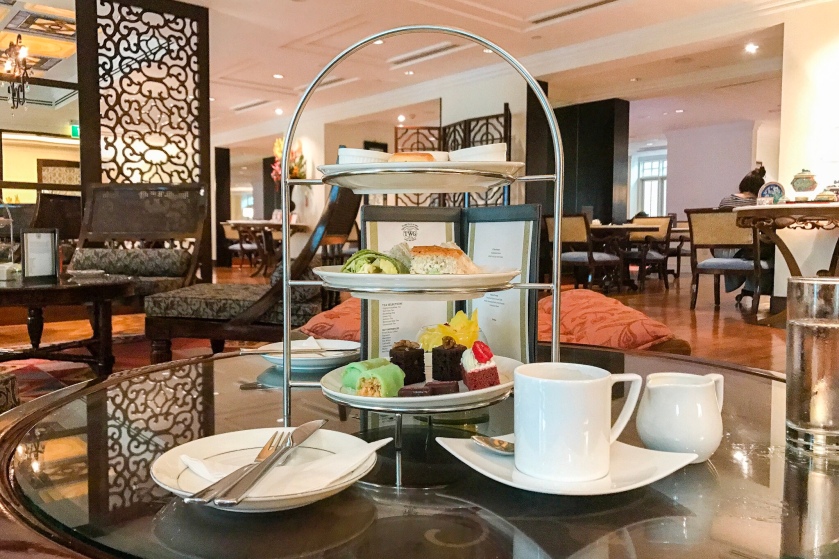 Now, I’m a big fan of scones and have been a great advocate of the scones offered by Conrad Centennial Singapore’s lounge, but this is equally good. The only downside? The cream comes in these small little tubs that I have to keep asking for refills for.

I didn’t linger too much for the evening cocktails, given that I had dinner plans but I managed to have a drink and their hot canapes. While they have a small spread of cold food items such as sushi, etc.

As with most other hotels with club benefits, you can either have breakfast at the Club Lounge or at Ash & Elm, the hotel’s signature restaurant (which serves up an awesome brunch on Sundays). While I have not tried Ash & Elm personally before, I have heard about how bad the weekend breakfast crowd can get so I decided to have a quiet breakfast at the lounge. 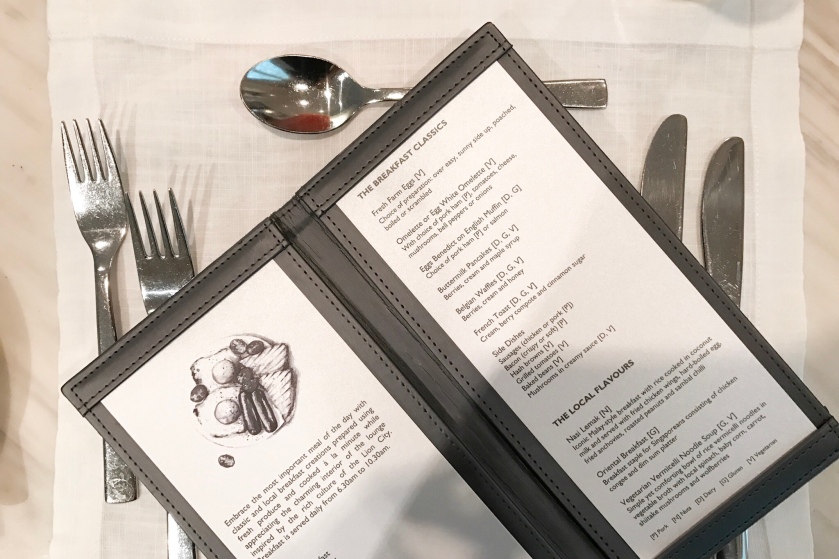 At 9am the lounge was about half full, and quickly filled up shortly after I was seated. While it was a huge lounge, they were incredibly generous with space – there weren’t many tables available.

Breakfast was a combination of a continental buffet breakfast as well as a ala carte selection of hot plates. As with Pan Pacific Orchard, there was a selection of western and Asian dishes that you can choose from, although I do appreciate the smaller servings so that I can request for more when I want to. The hot plates weren’t as delightful as the ones I had at Pan Pacific Orchard, but still very much decent. 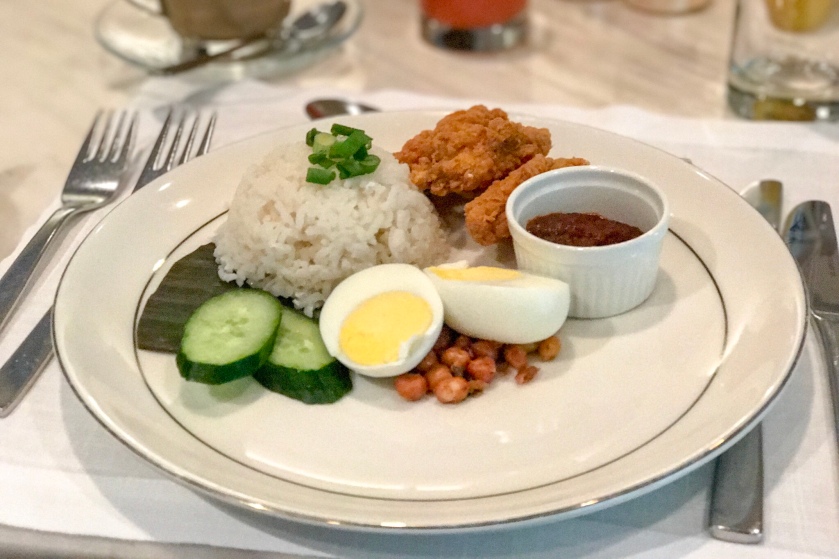 I had the nasi lemak, and being overly obsessed with this dish I found the rice too moist (I prefer them to be a little dry and chewy) but the sambal more than made up for it. I also had the oriental breakfast selection, consisting of the congee and the assorted dim sum. The congee was good but I can’t say the same for the dim sum.

Being somewhat a cross between a business hotel and a leisure one, the hotel is fully equipped with a range of facilities, including recreational and conference venues.

The hotel is a popular one for conferences and meetings given its central location, as well as banquets. During my stay there, I saw at least two weddings (one in the afternoon and one in the evening) and that certainly added quite a buzz to the common areas at the hotel. 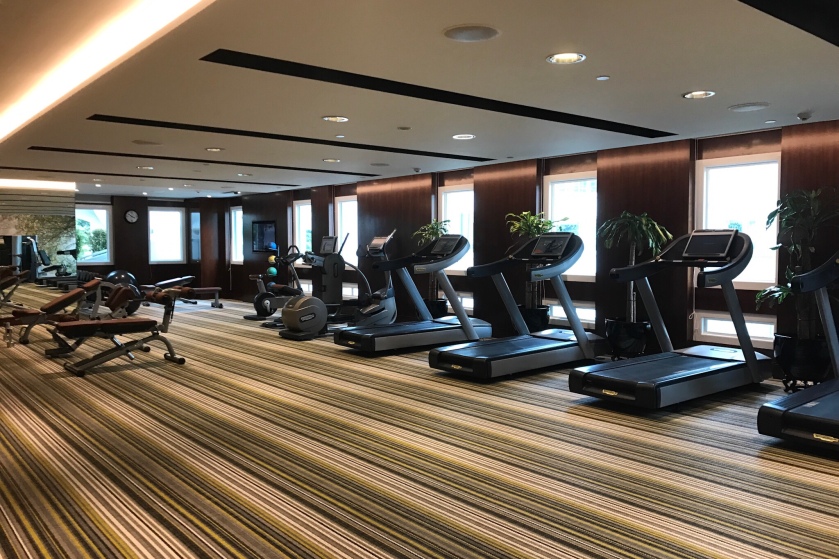 On the recreation end, the outdoor pool is located at level 4, and is somewhat small. The one and only time I checked it out, there were at least two dozen people on deck chairs around it and I can imagine it will feel a little daunting to swim in it.

The gym on the other hand was fairly well equipped and adequately spacious. You could lay out plenty of mats and do a few cartwheels without hitting any machines, which was great. While there wasn’t a squat rack for hardcore hummers (well why would you be doing squats at a hotel gym) but there was at least a smith machine and a good range of dumbbells for a holiday workout.

A bonus – there was a sauna in the changing room, another rarity in newer hotels.

Overall this is a great property. Being so close to shopping venues and right atop a subway station, this is definitely a premium location but yet provides a respite from the buzz of city life if you need some time and space to relax. The incredibly well adorned club lounge with its amazing food and beverage provisions is one to die for, and is definitely value for money. What needs a little more help is definitely a refresh of the rooms. The finer details of the rooms are starting to show signs of age (especially in the heritage wings), so a refurbishment will definitely provide a boost to the already great hotel.