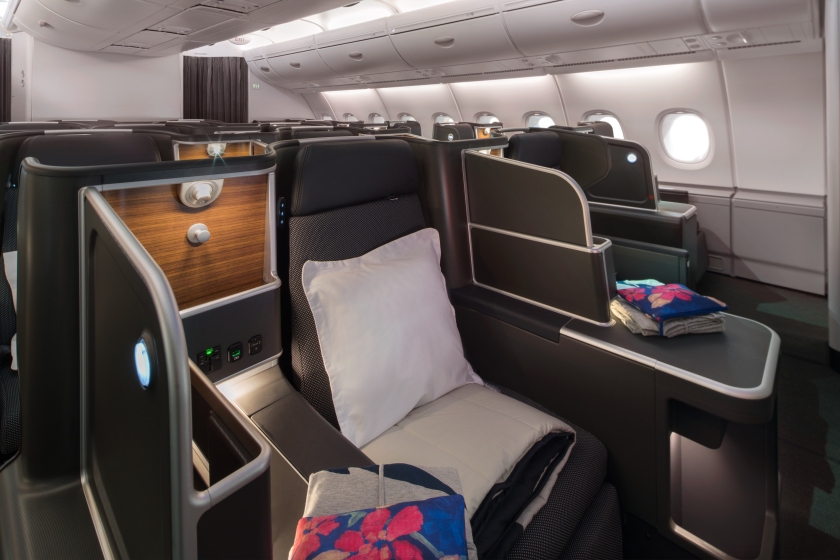 After more than 18 months since Qantas announced a refurbishment programme for its A380 fleet, the first of the refreshed birds is finally out of the factory and back in the skies.

The first of Qantas’ twelve refurbished Airbus A380 will begin flying the flagship Sydney-Singapore-London route next week, following an extensive make-over which includes a modernisation of the first class cabin and installation of the airline’s latest business class seats, along with two new upper deck lounges.

The multimillion-dollar upgrade most significantly features an upgraded business class cabin featuring their flagship business suites, as well as their latest premium economy product. The upper deck is also now exclusively premium, with all economy class seats now moved to the lower deck. The on-board lounge has also been redesigned.

Don’t expect to see a brand new first class product on the Qantas A380 – which isn’t necessarily a bad thing given that the product actually works (see my review here!) and remains pretty luxurious even a decade after it was first rolled out.

Marc Newson, the renowned Australian designer who came up with the original first class suites, once again worked with Qantas to refresh the 14 seats. The upgrades included a more comfortable contoured seat, as well as a larger video screen to replace the aging monitors.

In business class, the old Skybeds have now been upgraded to the 1-2-1 configuration business suites, which provides all 70 seats with direct aisle access in the upper deck.

With all economy class seats now on the lower deck, all 341 economy class seats will get a light touch refresh, with the seat being re-upholstered and the in-flight entertainment screens being improved. The economy cabin is located behind the first class section.

The in-flight lounge on the upper deck has also gotten a refresh, to include some table space if you need to work or simply want to have a place to put your drink on. There’s also more seating as compared to the older lounge.

Where will VH-OQK fly to?

Qantas Group CEO has earlier said that the refurbished aircraft will not be put on a single route, but instead deployed across several markets so there’s a little ‘delight and surprise’ for the customers.

According to Executive Traveller, the new aircraft will first fly as QF2 from London tonta seconoy Sydney via Singapore since yesterday (30 Sep). That means, it will depart tonight (1 Oct) from Singapore to Sydney.

Subsequently, it will do another round of Sydney-London-Sydney via Singapore, before going on elsewhere.

How to know if you are flying with the new or old configuration?

That’s pretty straightforward. To know if you are flying on the new or old aircraft, simply look at the seatmap particularly if you are flying in business class. If the layout is a 1-2-1 configuration, you are definitely getting the new aircraft.

If you need a detailed seat map, you can click here.

Timeline for other A380s

With the first aircraft fresh out of the upgrade factory, Qantas has said that two more aircraft are expected to be upgraded by the end of 2019, with the remaining nine to be completed before the end of 2020. By that time, the business class experience across its A330, A380 and Boeing 787-9 will be consistent, which will be a boost for its customers.