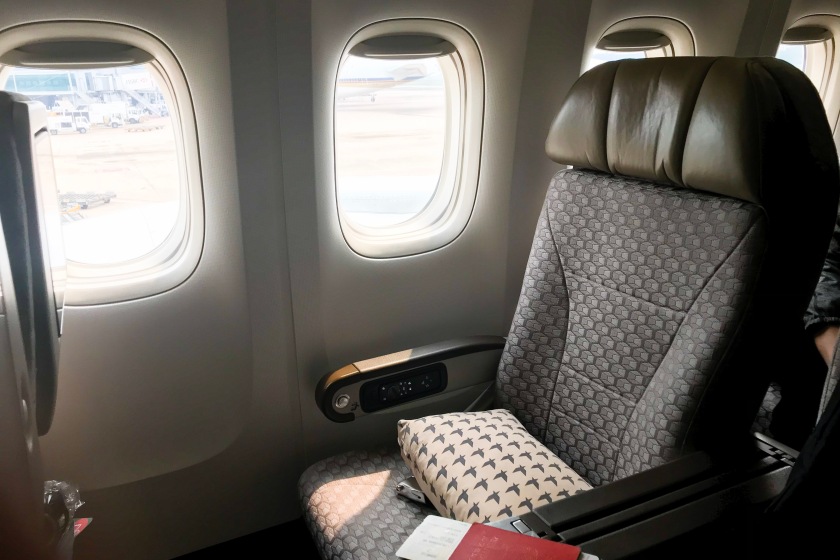 This review came as quite a surprise as I never quite planned to travel in EVA Air’s premium economy.

Having planned a weekend trip to Taipei, I had originally booked myself in Economy on EVA Air. When I was checking in, I was told that Economy was overbooked (by almost 20 seats no less!) and that I could pay for an upgrade to Premium Economy if I’d like.

Having not tried the Premium Economy product before, I decided to shell out USD150 (or S$207) for the upgrade to try it out. A tad expensive if you ask me, but given that a return premium economy class cabin typically cost $200 to $300 more than the economy ticket, I thought the price was pretty fair.

EVA Air operates two daily flights between Singapore and Taipei, both using the B777-300ER in a three-class configuration. On some days, you will get the Hello Kitty aircraft, which only made Singapore one of its permanent destinations several years ago. 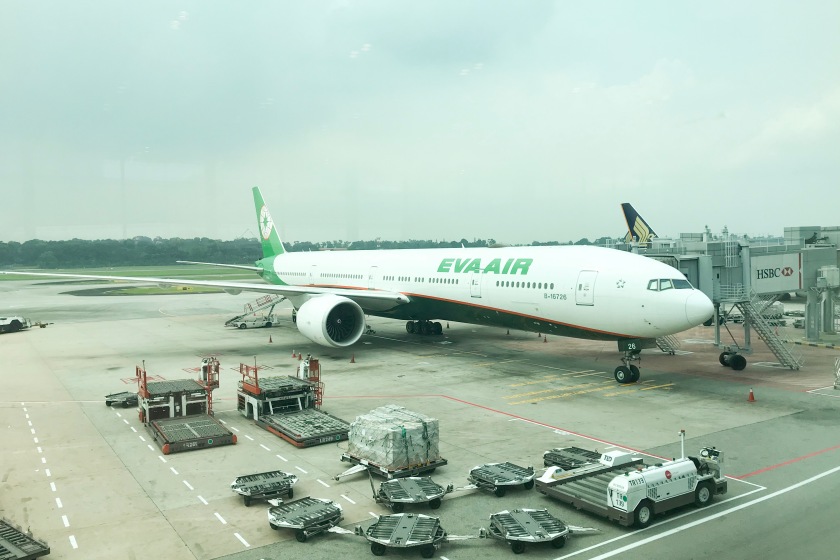 On the B777-300ER that I’m on today, there are three classes: the Royal Laurel, The Premium Economy and Economy. You probably guessed it, Royal Laurel is EVA’s term for business class.

I got a window seat, 22K, for my flight today. While economy class was full, the premium economy was only about half occupied. The premium economy cabin was a separate cabin of 56 seats, in a 2-4-2 configuration spread over 7 rows.

The cabin is divided from the business by a thin partition, but separated from economy with a gap that allows passengers to cross between both aisles. There were also two dedicated lavatories for the Premium Economy cabin, which was pretty generous.

Now, the seat. The seat was surprisingly wide, even though you hear about how premium economy tend to be a rip-off for the price you pay. According to SeatGuru, EVA Air premium economy seats on the B777-300ER measures 19.3 inches across, which was an inch wider than the economy class seat. The seat pitch (the distance between each row) is a good 38 inches, and as I sat down, there was still ample knee room in front of me.

For comparison sake, Singapore Airlines’ premium economy seats in B777-300ER measures 19.5 inches across with the same pitch of 38 inches, so it’s comparable.

For a good rest, the seat can recline quite a fair bit. I was pretty tired so I actually had a good hour odd nap on the reclined seat, which was suprisingly good given that I usually can’t sleep on planes.

Beyond the numbers, I had to say that the cabin felt adequately spacious. While I had a seat neighbour, I still feel like I had enough space on all fronts: enough space to stretch out in front of me, and I certainly didn’t feel like my neighbour was always looking over my shoulder.

The seat contains an 11-inch entertainment screen with a stowed handset by the side of one armrest, along with a foldable table on the other. Beneath the seat, there is also one power socket per seat, along with a USB port for those electronics that you may want to charge during your flight.

In front of me there was a seatback pocket, containing the usual array of literature, including the safety card, in-flight magazine, and a shopping catalogue. I checked out the shopping catalogue and what caught my eye was their Hello Kitty fleet merchandise.

\For those who are not in the know, EVA Air has the rights to dress some of their planes in the Hello Kitty designs, and they brought up the experience a notch by also customising the in-flight seats, meals and entertainment to the theme as well. There are only seven such planes that EVA Air operate, and they ply only select routes from Taiwan, such as New York, Tokyo and Singapore.

I decided to try my luck and ask the crew if they were carrying the model aircraft on the flight today, but was told that the Hello Kitty merchandise were only carried on those special flights. How sad!

There was no pre-flight beverage, but that wasn’t a problem at all. Given that the economy class passengers have to flow through the premium economy cabin, I don’t see how the crew could get us anything, anyway.

Once we reach cruising altitude, the cabin crew quickly drew the curtains between economy and premium class, making our cabin really private.

The flight time to Taipei was going to be slightly under 5 hours, so that means one meal service. While the cabin crew starts preparing for meals in the galley, some of them also came around offering one round of drinks and some Taiwanese rice crackers. Drinks were served in disposable plastic cups, which was hardly premium but similar to what other airlines do, including Qantas and Singapore Airlines.

The menu in premium economy is largely similar to economy, with the only enhancement being sparkling wine available in this cabin. The brut served today was the Perelada Cava Stars Brut & Brut, 2015 from Spain, which was pretty alright, but not memorable and definitely nowhere near champagne.

For lunch today, there was a choice between stewed chicken with red date and chestnut, served with rice, or a braised beef pizzaiola with green peas mashed potatoes. I went with the beef.

The meal was served in a single platter, similar to what you get in economy class. As a starter, there was a potato salad (yummy, but I’m not a fan of potato salad), a hot bun and butter, a slice of green tea cake and a fruit platter. Quite a fair bit of food if you ask me.

Now, about that beef. It was a hot mess. For some reason, any protein served in cubes and with sauce, always ends up as a hot mess. I’m not sure this is because of all the movements it has to take from the catering centre to my seat, or is it just meant to be that way. I’d give the presentation a 1 out of 10, although the taste is fairly good.

The cutlery used are metal, which was a relief given that there are still airlines that uses disposable ones.

After a while, the cabin crew came around offering coffee and tea. I was secretly hoping they would dish out ice cream, but none of that was obviously going to happen.

The crew seem to have gotten the pace right on point. Almost right after I was done with my meal and drinks, they came around to pick up the tray, so that we could keep the foldable table away. At this point, I asked for another glass of bubbly (why not?).

By the time lunch was done, we were barely two hours into the flight and there was still a little over two hours more to go. I decided to check out the in-flight entertainment system.

At 11 inches, the screen was reasonably sized. EVA Air also uses a noise cancelling headphones which were pretty decent, but not impressive.

The selection of movies sucked though. As an Asian carrier, I would have thought that they would carry a more exciting selection of Asian films, but I was wrong. There was probably less than two dozens Asian movies and most of them were not even recent. I ended up watching Ocean’s Eight, which was about right for the remaining duration of the flight.

EVA Air serves up a pretty competitive premium economy cabin. As one of the few Asian airlines which had the cabin and kept it there throughout its history since introduction, it is still worthy of a try today. After that short haul flight, I thought this would be a pretty bearable product to spend money on, if I were to travel to US from Asia on my own dime.

For a premium economy product to be fully worth its premium, I’d like to see airlines to go up a notch in terms of service.

At present, all major carriers with premium economy simply serve the cabin the same way they do in economy, given galley space and weight constraints, along with crew-to-passenger ratio in the cabin.

While it may not be practical to provide a course-by-course service as you’ll see in business or first class, but perhaps an innovative way of presenting the meal may change the way premium economy is positioned in the market.

For instance, a typical three course meal could be broken down into two: the starter and the main served as one, while offering business class-style desserts.

Cathay Pacific to axe 6,000 employees, gets rid of Cathay...

British Airways running 50% off award redemptions, but should...