I had to go to Shanghai for business at short notice, so routing was pretty difficult. Given flights into Shanghai was pretty full, I ended up booking myself on JAL on a slightly circuitous route, via Tokyo Haneda.

I have travelled on JAL several years ago on a holiday, albeit in Economy, but was incredibly impressed with the comfort and space of the seat, and more remarkably the in-flight catering too.

So this time round, I was equally excited to have a chance to try their business class product, in particular, the latest Sky Suites III.

Japanese airlines have always been known to offer a great quality of service, synonymous with their culture of hospitality. However, despite that, they have never been as popular as some of the other Asian carriers such as Cathay Pacific and Singapore Airlines, which I can only imagine is due to its relatively uncompetitive pricing and less aggressive marketing activities outside of Japan. 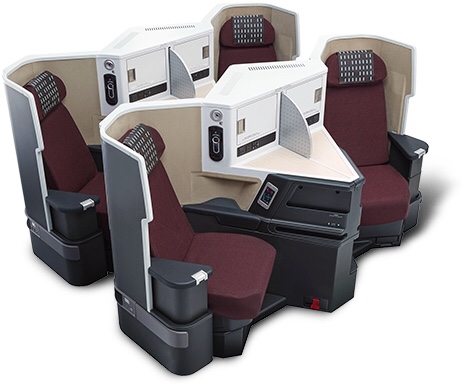 On the Boeing 777-300ER that I travelled on today, the business class section features a reverse herringbone layout of 1-2-1, all fitted with the Sky Suites III.

Japan Airlines have got two key layouts to its business class cabins: the Sky Suite and the Sky Suite III. The Sky Suite is either a 2-3-2 configuration on the Boeing 777s or a 2-2-2 layout on the 787s. While all the seats boasts of unimpeded aisle access, this is achieved through the partitioning of the seats in a creative manner so that one does not have to jump over your seat neighbour, but instead walk out in a respectable manner.

The Sky Suite III appears on most of the intra-Asia flights (and some Honolulu services), but the older Sky Suite features on most American services.

You might be curious to know what happened to the Sky Suites II – they are exclusively on the Boeing 767s that Japan Airlines still operate to select destinations, but for the purpose of today’s review let’s forget about them.

Back to the Sky Suites III. At first glance, the seat is incredibly claustrophobic. There was hardly room for me to walk into my seat due to the way the seat was angled, and the way the pull-down table was fitted.

The pull-down table was in a compartment in front of the seat, to the side of the in-flight entertainment screen. This creates a little bulk that juts out, restricted the passage in and out of the seat.

What that means is that, whenever I want to get in or out of my seat, I’ll have to squeeze out of my seat sideways, which was certainly not without bumps in the middle of the night if I needed the bathroom.

Once seated, the good news is that there’s plenty of legroom. Under the entertainment screen was a cubbyhole that forms part of your bed, and that hole extends quite deep in, I think I could let my six-month old baby sleep inside there, no problem.

The seat itself isn’t very wide, but as most Japanese are pretty small in size, this is not exactly a problem.

It’s worthy to note that the flight offers in-flight wifi at a nominal fee starting at USD10.15 for an hour to USD18.80 for the entire flight, which was pretty standard for in-flight wifi services. I don’t usually log on to wifi in-flight (I like the feeling of being uncontactable, even if it’s for a few hours), but having this option is always good especially if you are supposed to stay contactable.

If you are like me who prefers to read, there are also an array of reading materials from newspapers to magazines available at the galley for passengers to pick up. Unfortunately for me, most of them are in Japanese.

Despite the very late scheduled departure time out of Singapore, there is still a snack option for those who may be hungry.

JAL’s in-flight dining is styled as BEDD Sky Auberge. I did some googling after getting off the flight but didn’t get any satisfactory answer as to what BEDD stands for. The only thing the marketing spiel mentioned was that the last D of BEDD stands for Dine, Delicious and Dream. Okay…

Nonetheless, it’s heartening to know that Japan Airlines still offer two meal services (albeit one is a snack or refreshment), as Singapore Airlines have moved towards simply offering a single meal for the almost seven-hour flight.

On menu for the late night snack today was a grilled chicken, as well as a chawanmushi, or steamed egg custard.

I didn’t try any of those, and decided to head straight to bed. 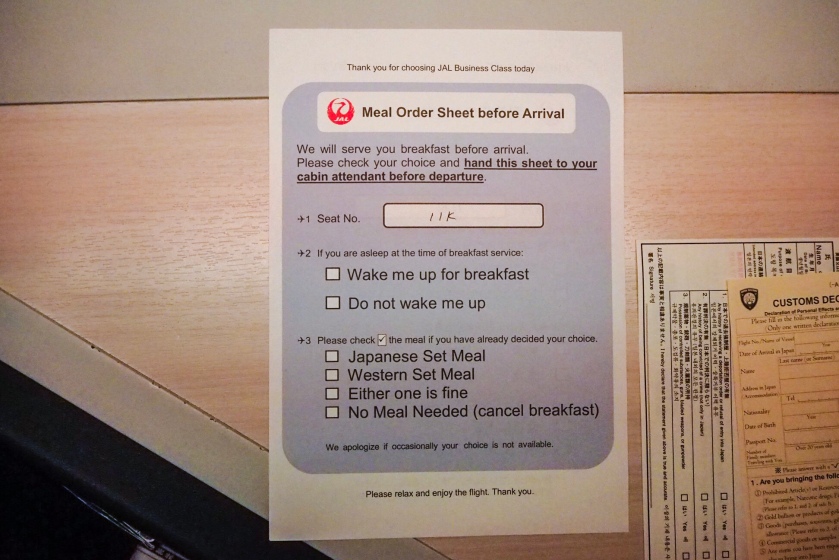 For breakfast, there was a breakfast order chit that was placed on my seat before I got there, asking if I wanted breakfast and my preferred choice of breakfast. While we were still on the ground, the cabin crew came around to collect those forms. I opted for a Japanese breakfast.

About 90 minutes before landing, the cabin crew came around to wake passengers up for breakfast. My table was promptly set, before the crew came by with some water and juice.

Shortly after, a very beautiful Japanese breakfast set was placed in front of me. It was probably the best breakfast I had in the air. Ever.

Right in front of me was an assortment of fruits, chicken roll with burdock, tamago (egg), and grilled fish cake, Japanese pickles, and some simmered eggplant.

The main grilled dish was a grilled salmon, accompanied with steamed koshihikari rice and miso soup. I couldn’t ask for more.

I slowly savoured every single item, which was so delicately and immaculately presented, a total joy to see and to eat. The taste was on point, the rice was warm and fluffy, and the salmon tasted as though it was freshly prepared. It was indeed one of the finest meals I had on a plane.

To wash off the meal, I had two coffees. For those who don’t know, JAL curate their own coffee collection, called the JAL Cafe Lines, where they work with a Japanese coffee master who recommends the coffee used in-flight.

And with the end of the meal service, the cabin crew was very prompt to come around to keep everything in preparation for landing.

All in all, my flight was probably close to my dream business class flight: excellent food, polite service, and a seat where most of the things worked. Japan Airlines is one of the airlines where the moment I got on, I have a strong sense that I was already there in Japan – the cuisine, the service, the environment was just so Japanese, and this worked for me.

I like how the service was polite, seemingly genuine, and more importantly, perceptive. They know when to come around, and when to give you space. 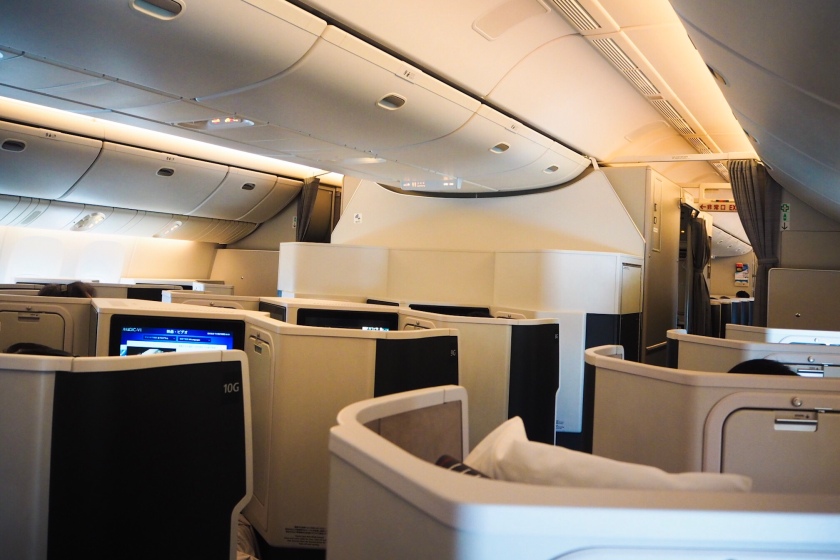 The seat may not be great, but it was good enough to sleep in. The cubby hole is actually incredibly important. With a lot of airlines now compacting business class seats in a similar fashion where the foot well extends into the seat in front of you, what is usually the case is that the holes are too narrow to fit different sleeping styles. In this case, the JAL seats work for me.

The only shortcoming of the seat was probably the table. I’m thinking there must be a better place to store the fold-down table from, as it is a rather big bulge that eats into the seat space at the moment.

While they do not offer perks such as pyjamas and offer only a small basic amenity kit, most times, these things can be mitigated by bringing along your own supplies.

Having said that, I didn’t have a chance to check out the in-flight entertainment this time round, so that will remain a missing part of the puzzle as to whether this is the best business class I’ve ever taken.