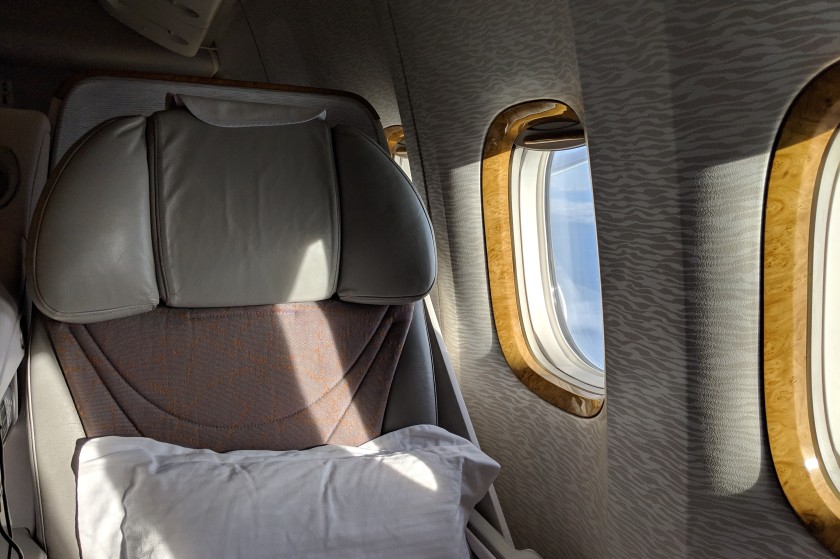 After spending a day to check out Hilton Dubai Creek and to wander around the scarily huge Dubai Mall, I was back at Dubai International Airport at Terminal 3 barely 20 hours after touching down the night before from London, to catch my connecting flight back to Singapore.

Emirates provides four shuttles on the seven-hour hop between Dubai and Singapore each day. Of the four flights, two are A380 services that terminates in Singapore, while the other two are B777-300ERs that operates onwards to Melbourne and Brisbane.

For my flight to Singapore today, I’ve decided to check out the Boeing 777-300ERs, which Emirates has a handful of in addition to its humongous A380 fleet. I have tried the A380 business class from London the day before, so I wanted to see what’s the difference.

While Emirates most recently made news with its brand new B777-300ER first class product, the business class on the B777s have been under fire for its 2-3-2 configuration, which pales in comparison to many other airlines who have opted for a 1-2-1 configuration that gives every premium customer direct aisle access.

My check-in at the terminal was generally very smooth. Business and first class passengers have their own driveway and dropoff points, which leads to dedicated check-in counters, and also its set of immigration and security checkpoints. From the time I arrived at the curbside, I reckon I was in the transit area less than 20 minutes after I was done.

Note that Dubai Terminal 3 is huge – there are three concourses: A, B & C. The check-in area will lead you directly to concourse B after you clear immigration and security, so please leave ample time if you are flying out of A or C gates.

Frequent flyers travelling through Emirates will know that business class passengers will be able to board directly from the lounge onto the upper decks of the A380 flights from Concourse A. My flight today was at one of the gates at the far end of Concourse B, so that means that premium cabin passengers will have to leave the lounge to head to the gate for boarding.

Given that the B777-300ER is a single-deck aircraft, boarding for business and first class passengers are done through the front door, while economy class customers boarded through the second door.

The Emirates Boeing 777-300ER is a three class product, with 8 first class seats, 42 business class seats and 310 seats in economy.

My seat was a window bulkhead seat. Being at the bulkhead, the divider between me and my seat partner was extended, where the in-flight entertainment screen was stowed.

Note that this doesn’t extend to the middle column seats (seats DEF), as the entertainment screens are mounted on the cabin divider wall in front of them. For the rows behind, the screen is mounted on the seatback, so they do not have similar extensions in the seat divider.

Honestly, the protruded extension was both a pro and a con: the benefit was that the window seat (16A & 16K) felt incredibly private, particularly in bed mode, but getting in and out was a little bit of a challenge.

The seat measured 20.5 inches across, not terribly generous, but fairly comfortable for the Asian frame. Right on the side of my seat was a little compartment good for an iPad or a laptop to be stowed by your side.

In that little space was also a power socket, as well as two USB ports that you could use to charge your devices throughout your flight.

Between you and your seat partner was a drink holder, as well as a mini fold down panel that you could use to hold a small dish of nuts or a drink. I’m not sure if it’s due to wear and tear, but I found this very scary, it felt like my champagne will slip off and spill on me any time.

As the economy class passengers were still boarding, the cabin crew came around to offer a round of drinks. To my surprise, there was a rose champagne available for pre-departure drinks, which I naturally opted for.

The crew also came around offering an amenity kit. The kit bag itself wasn’t branded, but the amenities were from Bvlgari, containing: a body lotion, after shave balm, shaving cream, anti-perspirant, a small eau de cologne, shaver, dental kit and a pack of tissue paper. Pretty extensive!

Once we are at cruising altitude, the cabin crew came around to offer mattresses for all the business class passengers, as well as a round of drinks and nuts before dinner was served. As I really liked the Shiraz I had on the the earlier flight from London to Dubai, I decided to stick with that since it was served on this flight as well.

Dinner only commenced about 90 minutes into the flight, which in my opinion, was a tad too late. Bear in mind that this is a seven hour redeye flight that departed at 9pm, so as I didn’t eat anything before the flight, I was famished by the time I got on the flight. Even though I was watching a show on the in-flight entertainment, I found myself turning around every 15 minutes or so to see if dinner service was going to start.

The appetiser options were… not great. I went with the ocean trout, which was pretty much standard. The appetiser came with a side salad and a bread roll, which unfortunately wasn’t sufficiently warm nor fluffy.

While I walloped the appetiser within a minute, it probably took the crew another 20 minutes before the main course came about. By this time, I was both hungry and sleepy, which wasn’t the best state to be in. When my main course was set down in front of my, I swear I almost bit the cabin crew’s head off screamed at someone.

Now, back to the topic at hand: the food. I went for the beef tenderloin, even though frequent flyer collective wisdom typically advise against steaks of any sort. Surprisingly, this was good. Now, I wasn’t sure if that’s an effect of my hunger, but every bite of the beef was sufficiently tender and not overly chewy, which tends to be the case for airline catered beef. I wasn’t expected mash potatoes (it wasn’t clear from the menu), so that on the side was a perfect match to the protein.

By the time I was done with my main course, my seat partner gave up on wanting his dessert and decided to head to bed instead. I pressed on.

For dessert, I chose the chocolate coffee crokine (when in doubt, always go for chocolate unless you have an allergy). It was way too sweet for me, and the texture was also too sticky for me. I took two bites out of it and, swiftly cleared my own setting, and brought everything back to the galley myself. I think the cabin crew was shocked.

After that, I requested for a peppermint tea, my usual go-to end-of-day drink, before heading to the restroom. When I got back to my seat, my tea took yet another long while to come. I had to go the galley to ask for it again, only to figure that the cabin crew who took my order earlier forgot about it.

When the tea finally came, I took two sips, and went to bed.

The next thing I knew, I woke up with less than an hour to go on the flight. I quickly changed up, and slowly figured that breakfast service was over. I asked for a coffee, which again, took forever to come.

The service I received on this flight was probably the weakest link. Maybe it’s because my expectations were set from my last flight, and the exceptionally slow service really killed me.

It simply doesn’t make sense to have a 2.5-hour dinner service for a 7-hour redeye flight. While I understand most customers would have taken their meal at the lounge and went straight to bed, I observed that there were still plenty of customers eating. Some of these customers were travelling onwards to Australia, so all the more they needed their sleep given it was 3am in Brisbane at the time they boarded the flight, but chose to stay up for dinner anyway.

It could be a one-off incident, but the attention and speed to requests was simply appalling in a business cabin. Many a times, I found that I had to ask for items for than once, or in the case of my peppermint tea, it seemed like it was forgotten. This is clearly unacceptable for a business class service for a world-class airline.

If we put that aside, the seat actually worked for me. While the 2-3-2 arrangement may not work for solo travellers, I saw how it worked for families: two parents with a kid in tow enjoyed having the 3 middle seats, while couples who wanted to seat together weren’t limited to just middle seats. The Emirates seat was adequately designed, with sufficient storage for small items, even though there still isn’t a space for bags. Everything else worked: there was a power socket, USB ports, space for a drink and a place for me to stow my iPad or laptop.

The food was tip-top, even if I’m not a fan of the plating, but bearing in mind that’s a very subjective matter. The choice of wines was adequate to a layman like me too, but the offering of rose champagne really blew me off.

Overall the Emirates Boeing 777-300ER business product is still a strong one. While this competes with the more private, 1-2-1 direct aisle access seats that airlines like Singapore Airlines and Qantas are offering, but if you add in other aspects, including its incredibly well-stocked in-flight entertainment, this is definitely no pushover.