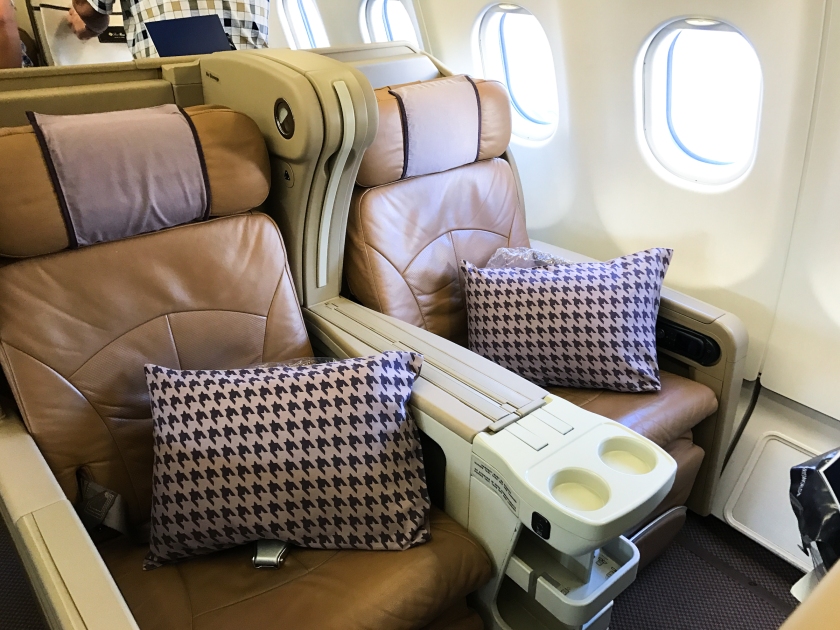 While planning for my weekend trip to Taipei I realised that Sunday evening flights back to Singapore were getting really expensive, so I decided to burn some miles as a treat to get home on Singapore Airline’s business class, partly to review the SilverKris lounge at Taipei airport which hardly had any reviews online (for good reasons).

Some people may not believe that short haul business class tickets are worth burning miles on, but I beg to differ. At 27,500 miles (each way) for a saver redemption (and this is after SQ scrapped the 15% discount for online redemptions), I do feel that the Singapore-Taipei sector is still worth the miles given that it’s the farthest SQ sector within the Hong Kong/Taiwan/South China region. By contrast, Singapore-Male is comparable in terms of flight time, but it will cost you another 7,500 miles in business class. 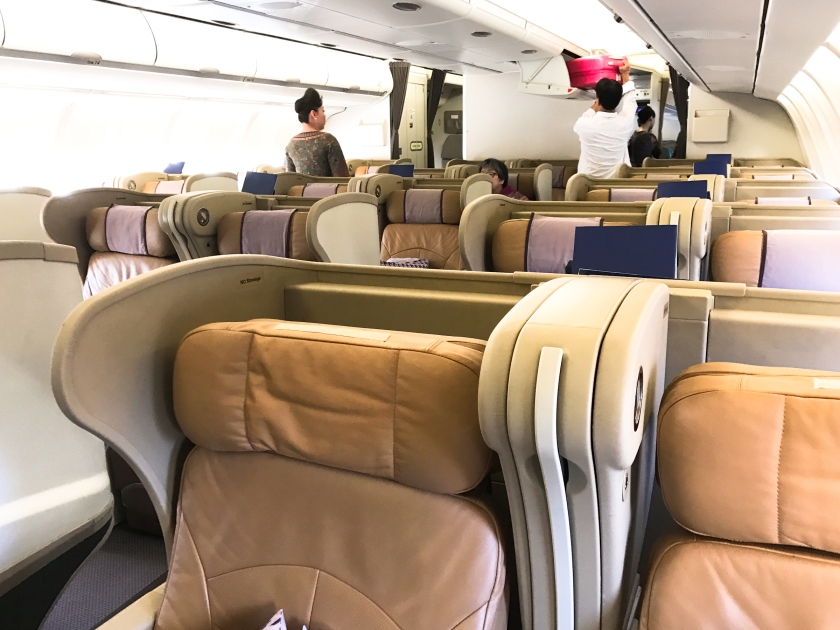 In terms of value per mile, given that SIN-TPE business class tickets on SQ trends around $2,200 round-trip, that translates to a redemption value of 3.9c per mile.

Singapore Airlines operates out of Terminal 2 at Taipei Taoyuan International Airport. With two flights a day, the check-in counter opens 2.5 hours before each flight and closes 40 minutes before the flight. While you can check-in conveniently online 48 hours before the flight, you will need to drop your bags from the counters at airport within the stipulated times. Note that there is no early check-in facility at Taipei airport, although I don’t see why you will want to go early given the distance from downtown and the lack of offerings at the airport or the lounge.

Given the flight volume, there usually isn’t a long queue. Just a tip: if you need to do tax refunds, remember to do it at the bridge towards the car park at Level 3 before you check-in otherwise it will be quite a backtrack from the check-in counters.

Soon after clearing immigration and security, I made my way to the SilverKris lounge a level above the main shopping floor to check out the lounge.

About 30 minutes before the scheduled departure time, I made my way to the gate thinking that boarding should have commenced. Alas, boarding had still not commenced when I got to the gate.

When boarding commenced I was one of the first few to enter the aircraft. Like many airlines, Singapore Airlines lay out its newspapers and magazines on a trolley right outside the aircraft door. I picked out two magazines and made my way to my seat at 11A. After the aircraft door has closed, I was delighted to find out that the seat next to me was going to be empty – oh what a joy!

The aircraft for this flight was a A330-300, featuring a two-class cabin consisting 30 seats in business class and 255 seats in economy. Singapore Airlines uses the A330-300 for most all of its short and some mid-haul flights, including Japan, Australia and India. In business class, this means a 2-2-2 configuration with seats by the window not having direct aisle access.

The back of the Business Class seat, with footrest nested under the seat in front of you

Given that the flights that the A330-300 serves range from Kuala Lumpur to Nagoya, the business cabin features a regional business class seat product. While SQ touts them as a ‘flat bed’ (which is technically correct), do note that in the bed mode the bed is at a slight incline of 172 degrees. Not the best product for overnight flights, so be sure to note the aircraft type when you book.

However, for short haul and day flights, the seat is an absolute delight to be in. At 24.5 inch wide, the seat is incredibly generous in terms of space with a great cushion and back to boot. While the airline post its seat pitch at 60 inches, this includes the space under the seat in front of you. I was at a bulkhead seat (or first row for laymen) so the leg room didn’t feel as generous. 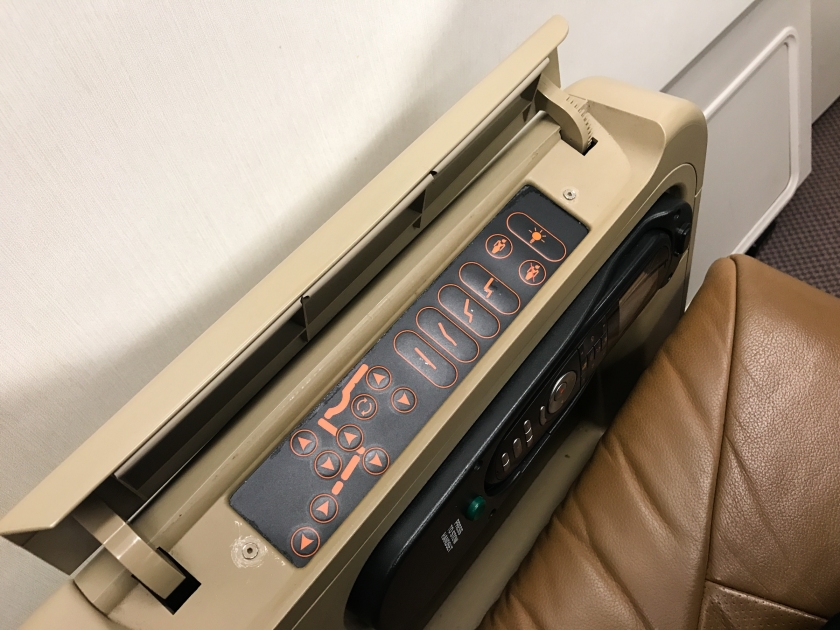 Control panel for the seat under the armrest

The seat controls were a little hard to figure out. Even though it wasn’t the first time I have been on the seat, it still took me a while to remember where to find the seat controls, USB ports and headphone sockets were. Storage wasn’t fantastic too – there was a small strange pocket by the side of the seat that allows you to slot in your laptop. Be careful if you wish to use that space to put your tablet/iPad in, because it might be hard to retrieve if you have got thick hands.

As with other airlines, business class passengers always board first and that also means that they will be served a pre-take off beverage while waiting for boarding to complete. When I first came on board, almost like clockwork, the stewardess came by and asked if I liked a glass of Charles Heidsieck Brut Reserve champagne or juice. No prizes for guessing which I went for.

Soon after take off, the crew came around to take around round of orders for drinks, while they prepare for meal service. This time I went for a coffee, which was served with a small tray of warm nuts.

Meal service commenced about an hour into flight. The appetizer was a beautifully plated antipasto of marinated prawn with smoked chicken and mozzarella, with balsamic dressing. 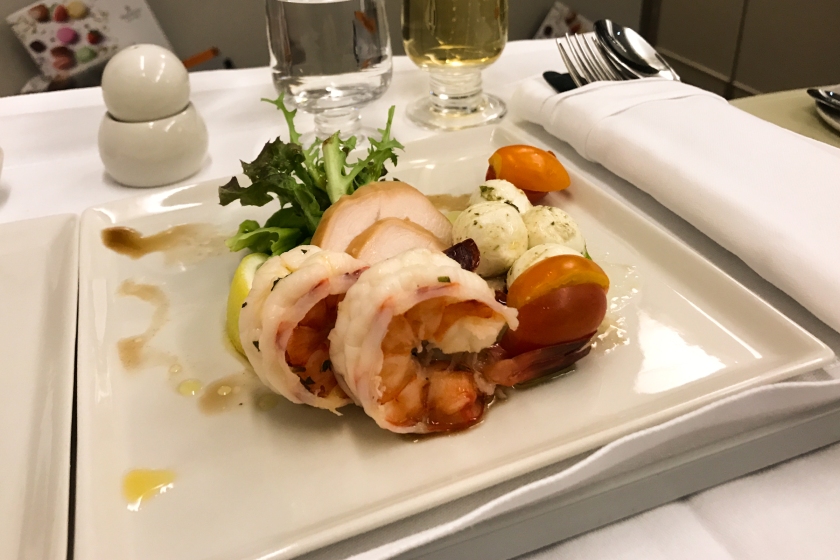 While the options for today’s lunch looked fantastic in the menu, I have pre-ordered the Seared Lamb Loin with Jus through the Book the Cook service on Singapore Airlines’ website before my flight.

The Book the Cook service is one of the industry’s best and possibly one of SQ’s unique proposition for its premium customers. Offering a dozen choices from most of the destinations that SQ flies out of, you will always find something that you like from the list.

On the website, the dish was described to be a “seared lamb loin with jus, crushed pea with mint, leek and olive oil mashed potato”. However, the presentation leaves much to be desired. I figured that mash potatoes, or anything mashed for that matter, is just a bad idea for in-flight meals. The lamb loin was rather nicely done though.

My choice of dessert was the Haagen Dazs mango sorbet, which was way too sweet for me. If it was that sweet at 35,000 feet, I’m not sure how it will be on ground.

Dinner service was over in under an hour, and with a final drink service, the crew pretty much left us alone until the end of the flight.

The Singapore Airlines in-flight entertainment system, KrisWorld, is touted to be one of the world’s best. In this month, the KrisWorld magazine (yes, the IFE comes with its own magazine) touted over 250 movies and more than 600 TV shows. Being an Asian airline, Singapore Airlines definitely has a rather decent selection of Chinese, Japanese and Korean films with a total of over 50 options to choose from. Definitely a plus point for me.

My 11A entertainment screen – a bit too far from me

Of course, I had to indulge in a Chinese film, which is constantly a pain point for me when I fly with Qantas for their lack of selection.

Overall the flight was definitely enjoyable – at 27,500 miles for a redemption business class ticket, this is definitely a value-for-miles redemption to travel in style either to or from Taipei.

The short side of this trip was the lacklustre Taipei SilverKris lounge, which you are better off without. Also, Singapore Airlines has long gotten away without offering frills such as amenity kits and pyjamas for their business class customers. While the relatively short flight doesn’t warrant the frills, but providing a well thought designed kit will definitely boost its ‘class above the rest’ status, just like how wildly popular its 70th anniversary limited edition amenity kit was received.

It’s true that the reigonal cabin product looked rather tired, but they are definitely still highly comfortable. Coupled with the right Business Class menu, the experience can still be pretty lux and worth the miles, or money.