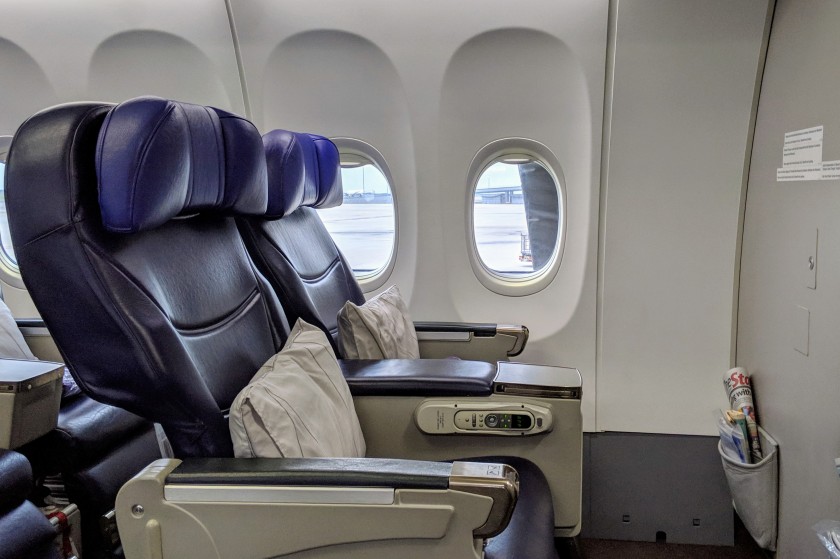 Continuing my journey from Ho Chi Minh City, the flight for the day is a short business class ride from Kuala Lumpur to Singapore with Malaysia Airlines.

The Kuala Lumpur to Singapore hop is an incredibly short one, typically the aircraft only cruises for less than thirty minutes before descending.

The business class seats are recliners, which is perfectly fine for ridiculously short haul routes like mine. What you need to be aware of is that Malaysia Airlines also uses these narrowbody aircraft on some mid-haul route, including the Shanghai Pudong — Kuala Lumpur red eye service that I took some time ago, and also sometimes to Perth. So, always check the aircraft before you book.

I’ve pretty much covered most of the seat in my review from Ho Chi Minh City to Kuala Lumpur, so there really isn’t much to add.

Given that this was a ridiculously short flight with under an hour flying, one should not expect anything much.

One thing to note in case you don’t already know this: Malaysia Airlines have taken off alcoholic beverages from all flights under three hours for a few years now, that effectively means all domestic service, as well as most of the regional services within Southeast Asia, no longer carry booze.

Shortly after I picked up the orange juice, the crew came around with a cold towel. Being pretty grossed out by the state of the cleanliness on my last flight, I used it to clean the armrests again.

Soon we were on our way. The moment we are at cruising height, the cabin crew around to offer a snack: a choice between a tuna sandwich, or a curry puff. I decided to go with the sandwich, which was quickly brought to me on a tray, with a piece of Beryl’s chocolate.

It was… alright. I also asked for a glass of sparkling water, which was promptly brought to me, along with the rest of the bottle.

After I was done with the sandwich and my drink, the cabin crew came around offering a choice of hot beverage, which I was pleasantly surprised at, given the short length of the flight. I opted for a green tea, which again, was brought to me rather quickly. I had at least another 15 minutes with the tea before it was being kept for landing.

Given that this is an incredibly short flight, there really isn’t much to expect out of a flight like this. It’s ridiculous to expect anything to eat on a flight like this, and you are better off filling yourself up with food before or after your flight.

The cabin crew is extremely efficient, which isn’t hard to achieve with only half the business seats filled.

The aircraft is incredibly old, but good enough for a short hop from Kuala Lumpur to Singapore. I generally have no issues with old aircraft, but what really bugs me is the state of cleanliness of the aircraft. Fortunately, this aircraft was a lot cleaner than the previous one I took from Ho Chi Minh City to Kuala Lumpur.

At the time of writing, a return business class ticket between Singapore and Malaysia is about S$700 from Singapore, or RM2,200 from Kuala Lumpur. If you are redeeming miles, that will set you back by at least 32,000 miles. No one should really be spending that kind of money or miles for a journey like this, and the only reason why you should fly this is if you are connecting on to somewhere else.

Earn both Qantas and Accor ALL points for your flights and...